Before I get into the review, I’d like to take a moment to thank Brittney Joy for the free copy of her book. Thank you for reach out to the LIAs blog and we hope the release of the sequel is going well!

I received a copy of OverRuled by Brittney Joy a few months ago but unfortunately, with everything happening at school I wasn’t able to read it until February of this year. I finished it pretty quickly though and I immediately set out to write this review. If you don’t know whatOverRuled is about, here’s the summary (as provided by Goodreads):

Two girls. One Kingdom. No way out.

Princess. Royal. Prisoner. Jade is the heir to the throne, but her mother, the Queen, isn’t willing to give up her title – ever. Queen Katrina doesn’t see her daughter as her legacy, but as a threat that has to be stopped. Jade has never left the palace, and is trapped inside its boundaries… but she wonders if the walls are meant to keep her safe, or keep her imprisoned.

Peasant. Pauper. Savior. Nova left the kingdom of Sterling before she could crawl – now that she’s returned with her father to rescue her orphaned cousin, it’s nothing short of a nightmare. Magic is used to control the people, and the monarchy is a dictatorship. Within the kingdom, Nova is hunted for a power she doesn’t even know she has… yet.

One boy will intertwine their lives – or tear them apart. Chael is the secretive and handsome royal guard that might have the answers to save both girls, but he’s hiding something dark. An ally with questionable motives, both Nova and jade have no choice but to trust Chael… and to fall for him. But the lengths the Queen will employ to secure her crown are unforgivable. In the Kingdom of Sterling, the only thing more powerful than betrayal is magic.

I’d like to start by saying I had a fun time reading this book. It was easy to read and it’s always interesting learning about a new, fantastical world. That being said, I think a lot of my enjoyment came from a nostalgic part of me. This book reminded me a lot about the types of books I’d read when I was younger, which was one thing I noticed right away. Although this book is marketed as a Young Adult novel, given its simplistic writing I’d say it’s more of a Young Readers (9-12) level. Which isn’t a bad thing, I just think more people around that age would enjoy it! It’s definitely something I would have loved reading when I was around twelve. 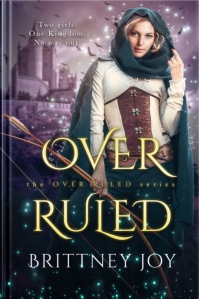 The magic system of the book interested me the most. The idea of harnessing a magic imbued into an object and passing it down your bloodline was really fascinating and I wish it had gone more in depth. I know the book is part of a series, so I’m assuming there will be more information on the different types of magic in the world in the later books. It just felt like the book could have taken more time to really explain it to the reader and I think if it had done that, I would have felt more immersed in the story.

For example, when Jade begins to discover more about her magic it would have been great to learn with her. Instead the reader only catches bits and pieces over the course of the story, not really getting the full view of how making potions or counteracting curses really works. I was also confused reading Nova’s parts, as her character seemed like she didn’t even believe in the existence of magic. This seemed a bit strange since it’s shown in the book that magic isn’t exclusive to the country of Sterling but can be found in other kingdoms as well.

Lastly, there was a character in the book that is fairly prevalent in the beginning of the book, a schoolboy by the name of Reese. His involvement diminishes by the end of the book, with no indication that we would ever hear from him again in the second book. Because of his extended and detailed communications with Nova, I felt like he would play a more central role but then he basically disappears by the end of the book.

Overall, I gave the book 2/5 stars. I think there’s a lot of potential and, keeping in mind that I did read an Advanced Reader’s Copy, so it may not have been completed edited by then, I think it could use more detail and some refinement. It was a really quick read, but I wouldn’t mind a longer book that fleshes out the characters and the world a bit more.