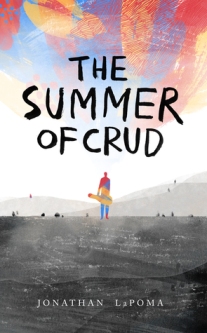 The summer after graduating from college, 22-year-old Danny Wolinski takes a cross-country US road trip with his friend, Ian Perez, hoping to find the inspiration to reach his songwriting potential, start a band, and avoid student teaching in the fall.

Danny is tormented by intense physical and psychological pain and sees music as his only relief, but the more he searches for this inspiration in an America filled with endless parties, heavy drugs, and lost souls, the more he questions whether it exists.

I’m not even sure where to start because honestly, reading this book was a wild ride. And not a good one. When I read the synopsis I thought it was going to be a young adult book about a guy whose into old school music (think Zepplin or Rolling Stones). I thought it’d be a kinda sappy but kinda cute story of two friends taking a road trip across the U.S. I was totally expecting some typical visit to obscure landmarks (the world’s largest guitar sculpture or something?).

Instead, this book was about our weird (again, not in a good way) protagonist travelling across the country with his “friend” who thinks eating hot dogs is “fucked up”. I’m still not sure what propelled him to spend weeks in a cramped car with someone who would probably forget you at the gas station and never come back to you, but I think this was supposed to make the protagonist, Danny, relatable. It didn’t exactly work.

He actually describes his “friend”, Ian, as ‘a lunatic, who, if he smells your panic, will do whatever he can to drive you over the edge’. Yeah, that sounds like a totally fun time. Where do I sign up? Not.

Ian spends the whole book making fun of Danny, spilling his secrets to every person they meet and berating him about his life choices. If they were in a relationship, it would be an abusive one. He’s also an asshole to his mom, on the one phone call he has with her, and I’m not really sure why that was included in the book. Ian is all about booze and drugs and telling Danny he’s an idiot for bringing a tent for the road trip, even though they’re expecting to camp some nights. Because, logic.

All these reasons is why it’s weird that Ian has so many friends across the country. Every place they visit it’s with a friend of Ian’s. Why do people like him so much? He’s not funny, he’s not attractive (or at least, the author doesn’t mention his looks at all) and he has nothing useful to say, ever. I think he’s supposed to be that character who’s an asshole but a lovable one. Except he’s not lovable, he’s the worst.

This isn’t to say that Danny is any better. He basically whines a lot and I’m not sure why. He’s supposed to be the typical young messed up guy, whose trying to find himself. Except he’s just an idiot, there’s no explanation or reasoning for any of his feelings. And yes, I know that sometimes there is no reason to feel depressed, but even that isn’t written about. So, what gives?

He also has a “personal bathroom problem” that he mentions like first thing in the book, and I spent the whole time wondering what the problem was. When it was revealed, I literally did not understand. I won’t go into it because spoilers, but I just don’t get it. Why was that a thing? It’s never explained and it really, really should have been. Or better yet, don’t include it in the story at all.

Finally, I think the worst part about this novel is that I don’t think the author knows what he’s writing. The kids are supposed to be these stereotypical young people figuring stuff out, being depressed, partying hard and doing every drug on the planet. All the in the spirit of going back to the sixties, when everything was so much better (apparently). The author has obviously not met someone under the age of thirty in a long time and doesn’t seem to realize that people don’t talk like they’re stereotypes. Try to give your characters some realistic qualities, or at least some realistic lines.

And above all, try to avoid the sentence: “You fucking changed, man.”