I first met Andrew Cassara back in the day while interning with Jonathan Menga when we photographed some promo shots for his I Know EP.

During the shoot, Andrew was dripping with pop star potential and made the whole time really fun. We got to experiment with lots of fun looks too! It has been great seeing his growth since his single “That’s Some Crazy” got major Canadian radio play.  So naturally, we wanted to interview him.

His most recent release, “Time Zones”, is a collaboration with Guy Fiasco. It is definitely a song that gets you into a party mood.

Since then Andrew has stacked on some new talent to work with. The roster consists of: Casey Mader on guitar, Andy Vasquez Valiente on bass and Jonathan Carlson on drums – all talented musicians that work alongside Andrew Cassara.

They had a music video shoot last month, at Cafe Dekcuf, that Alia was invited to. So she attended to get to know everyone a little bit better.

What is your daily life like?
AC: Lots of writing. I write a lot of music.

Do you write all of your own songs?

AC: Yeah. Now, I write multiple versions of the same song with a different version. Sometimes the melody comes first and then a lyrics come together. Or sometimes I pick up a melody and I’m in the middle of driving and I’m like “I gotta pull over and record this!”

What song came the easiest to you?

AC: “That’s Some Crazy” because the songs I write now they don’t come naturally.

Okay, Andy what about your life?

Ouh, that’s a really hard program. It must be really busy for you!

AVV: Once the school year starts I have no time for myself but I put in the hard work. Other than that I like to draw and paint a lot –

He can just make your album covers!

AC: He drew some really cool stuff – a lot of scary stuff actually.

AC: I dig it! We just gotta find what to do with it.

Andrew, how do you balance your music with other obligations and life?

AC:  Music will always be a priority, so we work our lives around music – especially me. I don’t make time for music, I make time for other things. Music is always on the mind.

How did you all get into music?

AVV: My dad and my brother have always been into music. My dad plays guitar – he actually played in a band when he was younger. When I was a kid, I [actually] first  started playing drums. My brother [who] played a lot of guitar, and I looked up to him for that, then said, “Y’know what? You should get a bass and then we should jam.” So I got my first used bass and he taught me a few things and from then on I just got into music.

AC: For me, I just love the Backstreet Boys so much. I received a cassette of their first album and I just… I love their music so much. I looked up to them and I eventually went to a Backstreet Boys singing competition when I was four years old. There was, like, 500 people [who entered] and it was at St. Laurent mall and I actually won.

So, basically their number one fan?

JC: So, I come from a very, very musical family – my mom went to McGill and studied Classical Voice and my dad actually opened for Gordon Lightfoot, in the [Toronto] folk scene way back in the day. We were constantly going to this one church that had a huge rock band and I would bang along with them – like I would hit stuff. The worship leader, Bev Moorhead – I’ll never forget her [because] she was amazing, she came down and asked me if I wanted to play drums. I was like, “YEAH!”, with my mom behind me like “NOOO!”. [Bev] gave me my first drum kit. I was eight years old and I’ve never looked back.

Wow, that’s great! So, even just from sitting here it feels like you’re a really great team and support system. How did you all meet?

AC: Well, I met Casey on Kijiji. After that, Casey had a [mutual friend at school] that knew Jon. And Casey met Andy…

AVV: I have a little story on how I met Casey. [One day] my girlfriend said to me, “I miss the graffiti in Montréal” and I said that I knew a place around Carleton. After we did that, we were passing by a park and there was this dense, chest-level fog. And I was like, “We have to go take pictures because this doesn’t happen.” So, we were taking pictures and this couple walks up to us and says, “Let us take pictures of you and we’ll take pictures of each other!”. Then, we started making small talk and I was asking Casey what he was doing in Ottawa. He said that his band got signed to a label and now I’m here doing that. Then, [I said] that I used to play in a band in Toronto. He [asked me what instrument I play], I said bass and he was like, “We fired our bassist last week – wanna give it a try?” It kinda was like fate – out of nowhere.

Wow, imagine if you hadn’t found that picture perfect moment! Now, how would you describe your sound based off artists that influence you?

AC: At first, we were really experimenting with sound and what we were doing. We were trying more towards pop – like bubblegum pop – which wasn’t very good. Now, the kind of music we’re making is very powerful but still pop… with a little a bit of rock-ish tinge and funk. We’re kinda going towards a Maroon 5 / Panic! at the Disco vibe.

Moving forward, have you considered a name for the band working alongside you, Andrew? What about Andrew Cassara and the Fog? Think about the band merch – I’d wear that.

AVV: Haha, that’s not bad! We’re trying to think of a name because [right now] we’re The Andrew Cassara Band. We’re sticking with it until we find a better name. I’m fine with it, it’s kinda growing on me.

If you could pick any artist, alive or dead, who would you love to collaborate with? Who would be the dream?

AVV: Flea from the Chili Peppers – he’s such a diverse bassist. I could just sit in a room and ask him questions about his life.

AC: Max Martin – he’s the producer of my favourite band.

JC: Dave Grohl. Or Travis Barker… just because I literally grew up learning drums from Blink-182. And Foo Fighters is the best – [Dave Grohl]’s a fucking legend.

What have you learnt from playing live shows?

AC: I’ve learned a lot because Steve, my mentor, is really tough on me. He really nitpicks to make me better. He always wants to make me better, which is great because I’ll be better this show than my last one. The thing I’ve learned most is about mic control ’cause like you doesn’t wanna make peoples’ ears bleed or be too soft. It’s hard because, in the beginning, you can’t really hear yourself so you think you sound great but maybe you don’t. 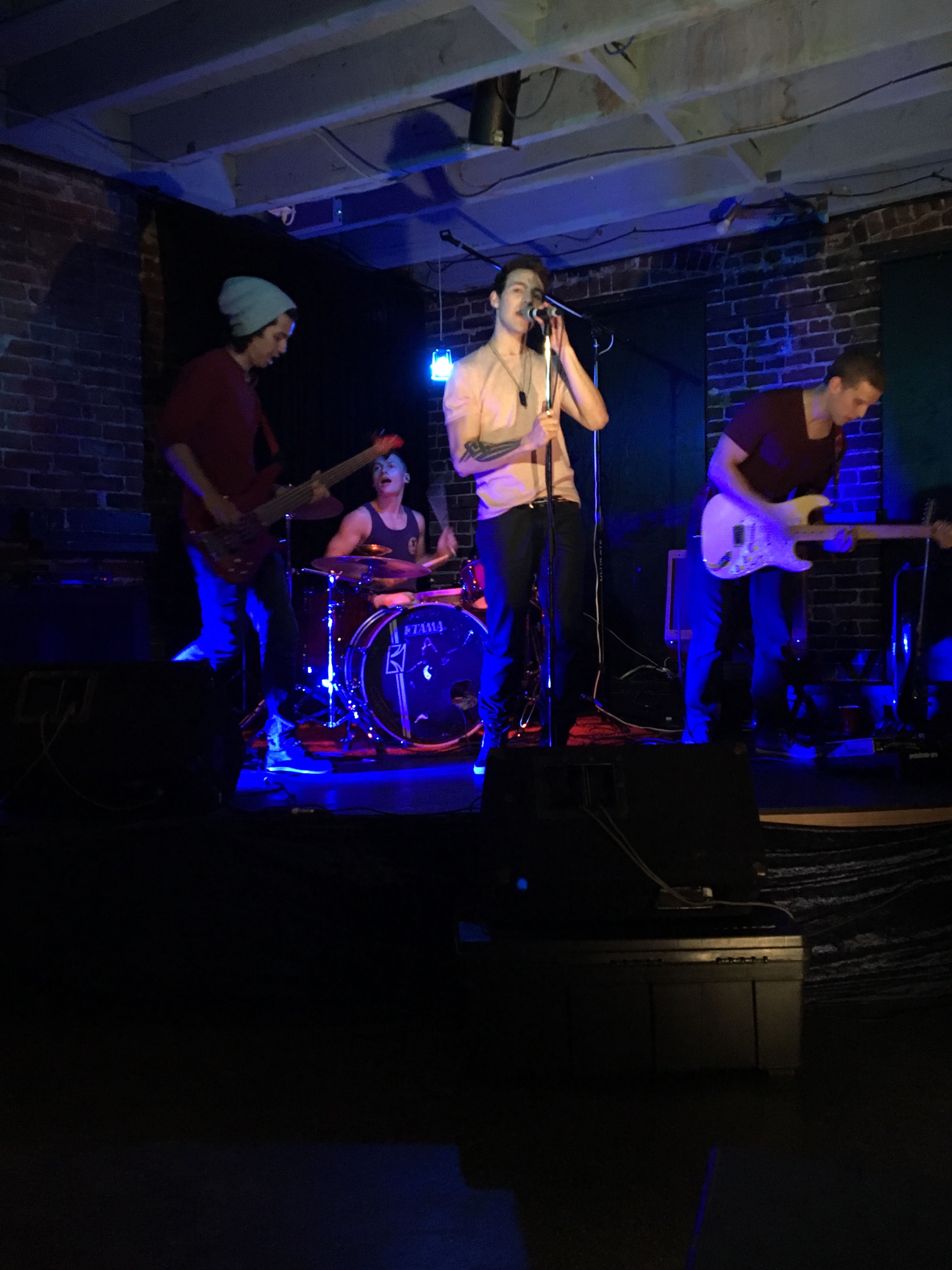 You can catch Andrew Cassara (and the Fog) at: